Bodil Bæksted Jørgensen does currently a PhD where she examines telerehabilitation for elderly patients. Iris Brunner interviewed her on June 4, 2020.

Can you tell us a little bit about yourself?

I am a physiotherapist at Aarhus University Hospital, responsible for professional development, I have an MSc in Health Sciences and currently doing a PhD on telerahabilitation. I have more than 20 years’ experience with geriatric patients, among others patients with COPD, cardiovascular diseases and patients after different types of surgery, e.g. hip replacements. I worked a lot with fall prevention and vertigo.
What made you interested in telerehabilitation (TR)?
I experienced that it required a lot of energy from the elderly patients to meet up for the training. Many needed help to get ready to leave the house, needed transport, and were supposed to wait at the rehab center. Therefore, they could be quite exhausted already before the training started. For many patients, a lot of preparation is needed to receive a relatively small amount of training when they have to travel.

What was your project about?

The first project was designed to deliver seamless continuation of training after discharge to home from a geriatric ward at the hospital. In the beginning, we intended to include the older elderly people from 75 years onwards and also people who had no experience with computers. We soon had to realize that it would not work that way. There were many people with cognitive impairments, which is a major obstacle to participation in TR in this age group. Furthermore, teaching people computer literacy from scratch turned out to be unrealistic. Even many of those who owned a computer felt very insecure in using it. For many of our patients, it was just too overwhelming to start with TR. They came home from hospital, possibly received home care for the first time in their lives. To familiarize themselves with TR was just too much to cope with in this situation. We screened more than 300 patients and ended up with five. That is why I redirected the project in a different direction, which became project B, and decided to deliver group TR group training at a later point in time, not immediately after discharge.

What type of rehabilitation did you offer and which platform did you use?

The goal of the training was to prevent falls and to enhance the functional capacity. We used a sample of exercises, which have been developed in New Zealand, The Otago fall prevention program exercises, delivered by Physio-pedia (https://www.physio-pedia.com/Otago_Exercise_Programme). These are simple exercises suitable for a screen. They can be delivered synchronous and asynchronous, that means with and without the supervision of a therapist. All exercises can be done in standing or sitting position, which is important from a safety perspective. We did not use any VR in this project, just online training like in a video conference. The platform we used is called KMD VIVA.
The training program lasted for 4 weeks twice a week. The following four weeks the participants were supposed to exercise on their own. Twice a week the physiotherapists would contact the patients via the computer to see if there were any problems regarding the exercise sessions. During the latter four weeks it was still possible to communicate with the other team members. In this period, the exercises would also consist of exercises from the Otago program displayed on the computer in form of video sessions. It was not technical possible to conduct the last four weeks as planned, instead we ended up by conducting supervised Telerehabilitation for 8 weeks.

How did the technology work with a group, where not everybody has a computer or computer experience?

As with the first project, there were some challenges. However, patients in this project were younger, mean age 77.6 years, range 74-85 and most of them to some degree familiar with using a computer. This made things much easier. We provided the equipment and we also bought mobile WLAN since the internet connection was not sufficient everywhere.

How many home visits were necessary, how much support needed? Were caretakers involved?

Most of our participants lived alone, therefore caretakers were not much involved. Three to four home visits were necessary before the online training started. We also had to evaluate the patients and therefore planned several home visits anyway.

How did your participants experience the TR home training?

It was a really positive experience for most of them, particularly the social aspect. The fact that they were able to be together in a group, though physically apart, was very motivating for them. Frequently, I opened the virtual meeting room a while before the training started. When I joined in people were already chatting with each other, like in a real waiting room. Also during the training sessions they appreciated the possibility to talk to each other.

Can you give some examples of a successful training course with TR and one that didn’t work at all?

There was an 85-year-old woman who had been at the hospital for a longer period of time due to reduced lung capacity. Before admission to hospital, she had experienced a substantial decrease of her functional capacity. She was diagnosed chronic obstructive pulmonary disease (COPD) and discharged with long-term oxygen. She lived in a rural community and it would have been difficult to travel to the next community health center for training. She was offered an IPad and the possibility to participate in TR. At first, she was very dismissive and asked if this was a new way of saving expenses for therapists. She consented to participate despite her concerns. Initially, the TR was provided on an individual basis, later on she changed to TR group training. She ended up being really enthusiastic about TR. Her function had improved substantially and she also liked the social contact. She expressed her surprise about the ease of establishing good contact with the therapist online. She would now prefer TR to other rehabilitation if she could choose.
Another case was an 80-year-old woman, who was recruited from the fall clinic, where she was treated for dizziness. Additionally, she suffered from an anxiety disorder and practically never left the house apart from visits to the hospital. She had also COPD, and therefore reduced functional capacity. She participated in a TR training group, which worked fine until she got acute impaired hearing. According to her wish, we try to conduct the TR training only by her looking on the screen to see what the exercises look like. After a few sessions, we had to give up because her hearing impairment was too disruptive for the other participants in the group. We continued with individual TR sessions where her reduced hearing could better accommodated.
In general, what would you say is needed to make telerehabilitation a success story? Which wishes do have towards technology, education etc.?
In our case, it was apparent that we had to choose the right patients at the right time. TR worked much better with the “younger” elderly and when it was initiated some time after discharge, not immediately. Of course, technology could still be easier, fewer clicks, simple design. A touchscreen is more intuitive than a keyboard. The social aspect seems to be quite important.

(Article from the ISVR Newsletter Issue 18) 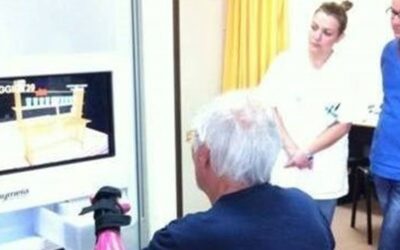 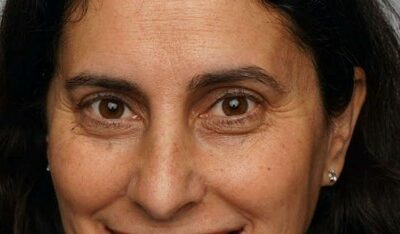 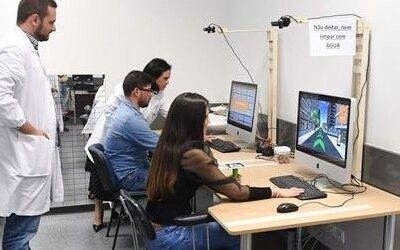